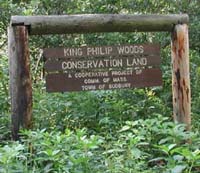 The King Philip Woods Conservation Land was purchased jointly by the State Department of Environmental Management and the Town of Sudbury in 1987. The 81 acre conservation land consists of two parcels. On the easterly side of Water Row is 57 acres of Sudbury River floodplain with over 1,300 feet of frontage on the Sudbury River. With the exception of a scenic viewing area, this portion of the parcel is not open to the public to ensure preservation of the wildlife habitat value of the floodplain. The westerly side of Water Row is mostly a forested upland with diverse topography, trails, a small pond and bog, and several interesting historic foundations.

The abandoned Old Berlin Road, historically an important stagecoach road from Boston to Lancaster, is now a dirt road running through the upland side of the parcel from Water Row to Old Sudbury Road. A short distance in from Water Row, on the right of Old Berlin Road, you will see the foundation of an old tavern. This was a 2’/2 story structure about the size of the Wayside Inn. It was here that the stagecoaches stopped to renew both man and beast before continuing their journey. It became a popular spot in the middle of the 18th century for certain unsavory “Gentlemen of the Road” namely highwaymen and horse thieves who were led by the notorious Captain Lightfoot. The Captain and his friends had plied their trade on the highways of England too successfully and for reasons of personal health were forced to leave their native land. Subsequently it was noticed that several travelers who left by stage for Lancaster failed to arrive at their destination, and warnings were posted advising travelers of the hazards of stage travel. With suspicion leveled at it, the tavern became unpopular as a stopping place and gradually fell into disrepair. A later owner investigating a stone in the basement unearthed 13 skeletons – apparently the unfortunate travelers who never made it to Lancaster. Some have said that when the moon is over the river and the mist creeps in, if you listen carefully you can hear the stagecoach rolling along and who knows, maybe even a hoarse voice calling “stand and deliver”.

On April 21, 1676, Sudbury, Lancaster, and Marlborough were burned to the ground by marauding Native Americans under the command of the Wampanoag Chief, King Philip. A feeling of impending crisis sent the Sudbury settlers to their six garrison houses. By 6:00 a.m. that fateful day, a force of 1,000 to 1,500 Native Americans under King Philip infiltrated the woods, burned the isolated farmhouses, and attacked the garrisons. None of the garrison houses remain today, but the foundation of the Haynes Garrison House can be seen on the adjacent town-owned parcel. It was to the Haynes Garrison House that the two Concord survivors of the Native American massacre at the Four-Arch Bridge (at the Sudbury River in Wayland) fled for refuge. Here, the defenders showed such courage and fierce determination to defend their homes, that by 1:00 p.m., the Native Americans gave up and faded into the woods. Perhaps the increasing frequency of musket fire from the direction of Green Hill drew the discouraged Native Americans over Goodman Hill to the main engagement. There, King Philip and his warriors finally overwhelmed the colonials that afternoon, but failed to consolidate their victory and began the slow descent into final defeat of the Native American peoples in southern New England.

Back to Conservation Office

Additional events may occur in meeting locations within this building